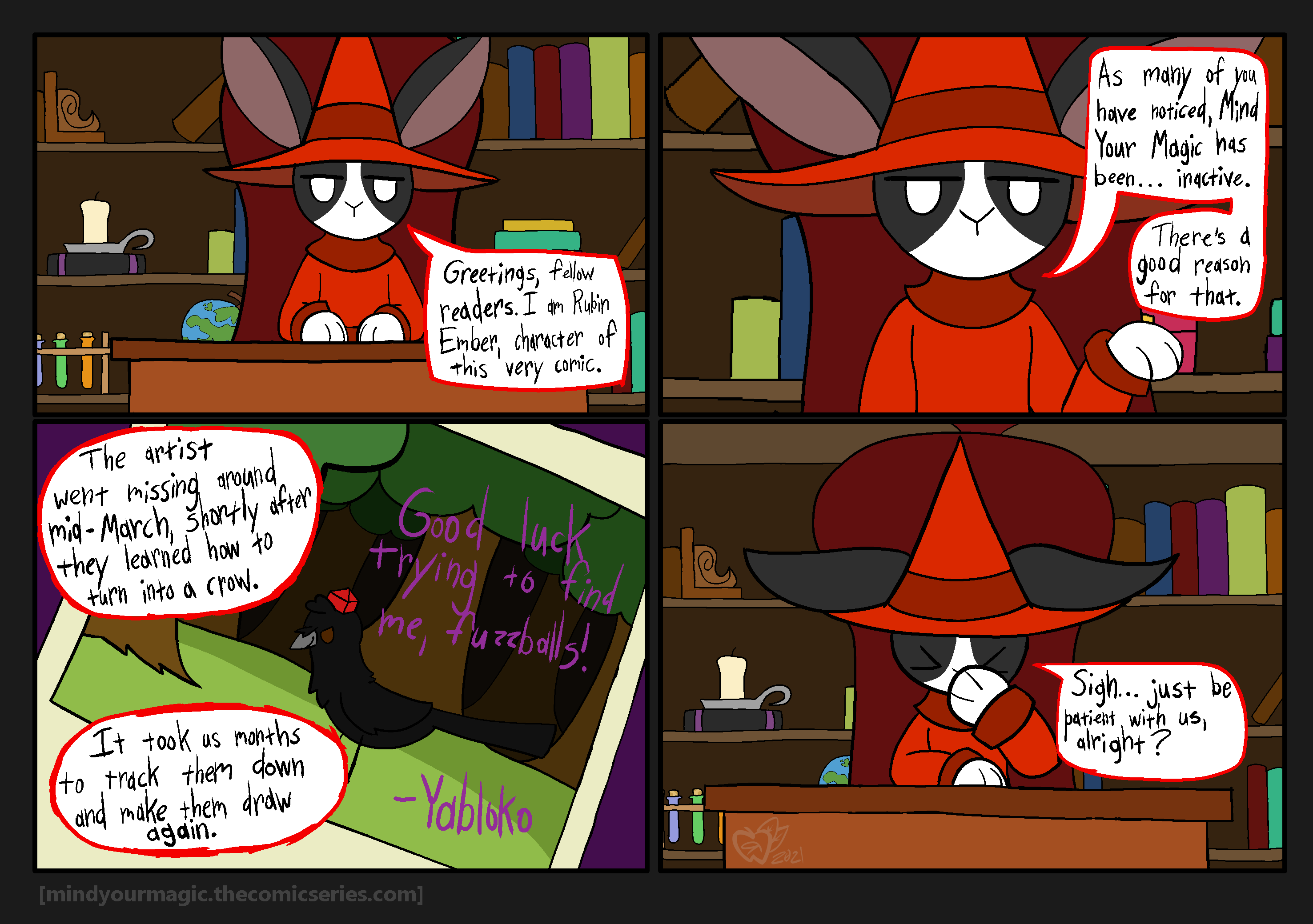 by YablokoAirPirate on 7th Jul 2021, 12:57 PM
Hello everyone! Just a quick blog post to say that I'm temporarily taking a hiatus from both this comic and Zombies and Marshmallows because I'm currently participating in Art Fight as well as dealing with real life stuff such as moving out of my college apartment and working at my job. Depending on how things go, I might come back in mid-August or early September.

Some things about this comic's future

by YablokoAirPirate on 26th Nov 2020, 4:50 AM
Here I am once again with another blog post. As of this writing, I have posted my first Mind Your Magic since July. Why did it take so long? Well, real life commitments aside, I start Autumn Leaves in late September, very near the time when I participated in Goretober. I set it aside thinking I would pick it up when Goretober was done. So flash foward to November, when I did go back to finish up the sketch work for the comic. Unfortunately, disaster happened and my original file for the comic got corrupted after I restarted my computer. I managed to save a copy of the sketch for the original, but at that point I decided to make a new one instead of trying to salvage the old one. And so, Autumn Leaves turned into a single panel comic from the original projected 5 panel-page, and honestly, I think it's better for me this way. I felt so exhased from school work that a simple comic for the autumn season was just enough. But this blog post is not about the recent comic, but rather I want to talk about something I have been thinking of for a long time.

Recently, I have been unhappy with the way the comic is currently. I feel like there's too many problems with the writing, the art, and the lack of polish. I am also not a fan of the icon, banner, and the overall site layout; they look so amateurish to me. It's been getting to the point that I struggle making strips for the comic since they're so trite. What I am saying is that, from this point forward, Mind Your Magic is going through a soft reboot. The current comics will stay and the general universe will be the same, but I am going to slowly change certain things both in and out-of-comic. The main things that will see some changing would be the character designs and the switch in strip layout, with a completely overhauled site being the biggest goal. I don't know how long this will all take, but the character designs would probably be finished before the site overhaul, which I will do in bits and pieces since I suck at HTML and site building :'3. There also may be a slight shift to a mainly once a week schedule, depending on how things go. But for now, I just want to say goodbye, because it's almost 5 am here and I haven't slept.
0 Comments >>

First Blog Post of the year (and the first overall)

So this is the first time that I'm using this thing, and since blog posts now receive notifs, I might as well tell about the comic and that.

So for one thing, I'm not dead. I took a break from the comic to destress and to be able to attend Art Fight. I originally intended to return late August, but my recent move to a new college and a new apartment ment that I've been focused more on school work and that. I haven't gotten the chance to work on the comic at all, and now with October and Goretober challenge around the corner, I've been trying to get back to drawing.

Long story short, I'm back and I'm currently working on making the first comic in months. I'm sorry if this is a little rambley, but I'm kinda tired and stuff, so I guess I'll end this.